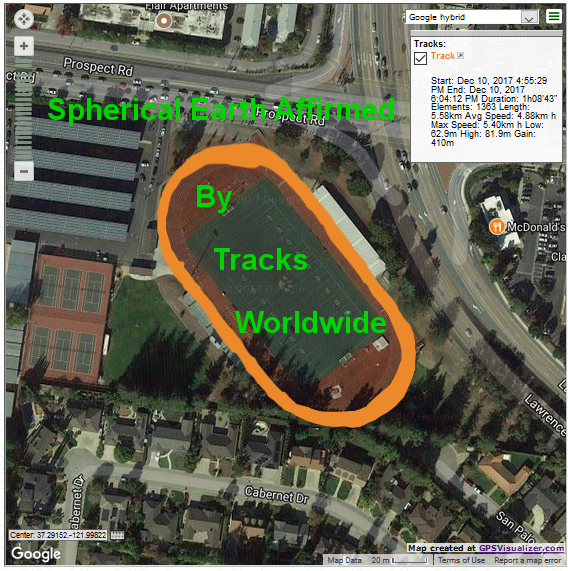 Spherical Earth Affirming One Running Track At A Time

In my previous blog post I mentioned looking at shorter trips and even walking routes that might give ample evidence to clearly affirm the spherical earth and debunk the flat earth.

And as I have tried a few different things, I have come upon a concept that will truly bring spherical earth affirming and flat earth debunking to the masses all over the world.

It turns out that no matter where you go throughout the world, wherever there is civilization, there are sports fields and running tracks, the tracks being nominally 400 meters around for one lap. It is true that there have been some different standards throughout the years, so tracks of differing dimensions will certainly be found. But anyone could easily measure for themselves the dimensions of their track for further verification if desired.

So no matter where most people live, they are most likely going to be able to find a nearby school with a track where they can go and do some walking (or running) around the track and do experiments with their GPS’s.

I have already done three different tracks at schools close to where I live. I will share the details of the one I just did yesterday.

I walked 12 laps in 1 hour 8 minutes 43 seconds. I stayed in the outermost lane the whole time, which in this case happened to be lane 8. I noted exactly where I started and after each lap would pause at that point for a few seconds just to mark that in the GPS data trace. As before, I used the tracking feature in GPS Essentials on my smartphone.

Once you finish the walk, you stop the tracking and then export the KML file. I then go to the website GPSVisualizer.com where I can upload the file and manipulate it in various ways, as I have explained in detail in previous posts. If you wish you can immediately have GPSVisualizer display the trace on a google map. I also convert it to a text file so I can import it into Excel where I do other calculations of my own, which again I have covered in detail in previous posts.

The beauty of using these running tracks is that they are pretty much standard throughout the world and wherever they are you can find them on google maps and verify that the traces of these tracks in terms of latitude and longitude make sense according to spherical earth surface geometry, but show major inconsistencies when trying to explain them according to flat earth circular disk surface geometry.

The inconsistencies become greater and greater the further south you go, so that in South America or Australia the inconsistencies are truly gross. Do you suppose that there may be some Olympic records that need to be adjusted according to flat earth theory? This is truly an important question to ponder. This is not unlike in an earlier blog post where I pointed out that the around the world flight non-stop without refueling was much more impressive and a greater world record according to flat earth theory.

As before I am sharing all my files through my Scribd account. You would at least need to register for a free Scribd account to be able to download the files, I believe.

I have also set up a special email address where anybody can email me GPS data files that they might like me to process for them. I have no idea how many might send me such files, so I cannot make any promises about processing all of them. Certainly those with some written explanation of what is included would rate higher in priority to process.

WILL FLAT EARTH ADVOCATES INDEFINITELY CLAIM THEY HAVE NO FLAT EARTH MAP?

We simply cannot let the flat earth advocates continue to use their ruse of claiming they have no flat earth map to continue evading the clear deviations from reality of their theory. The problem is that different aspects of their theory together lead to conflicting conclusions. I covered this in a satirical manner in my earlier blog post on Tri-Location on the Flat Earth.

So let me just state the simplest part of their theory that should clearly establish a correspondence between coordinates on the spherical earth map versus their claimed flat earth map. Since they show the Sun completing a cycle in 1 day or 24 hours, the Sun would have to traverse 360 degrees of longitude in 24 hours. This would be the same whether you have a spherical earth or a flat circular disk shaped earth. So if you know the longitude of a city on the spherical earth its longitude should be exactly the same on the flat earth map. Similar arguments can be made that latitude should also be equivalent if the equator and tropics of Capricorn and Cancer are interpreted equivalently between spherical and flat models, as surely they must be or the flat earth theory makes absolutely no sense at all.

So if you were to go to a southern hemisphere place in Chile or Australia and layout a running track according to flat earth geometry of latitude and longitude its shape will be grossly different than the actual running track laid out according to real measurements and also in precise agreement with spherical earth surface geometry of latitude and longitude. I plan to show this graphically in a future post.